Initial seasonal exposure to sunshine and critters at the Tamarindo bus stop had me counting high as I could, in Spanish, grande bites on my pink legs. Locals gave varied schedules, so I sat for some time until a bus pulled alongside, with signage for Liberia. Inquiring if that encompassed an aeropuerto stop seemed a trick question for the attendant in the stairwell, with a change purse. He paused momentarily, then signaled for me to hop on board. 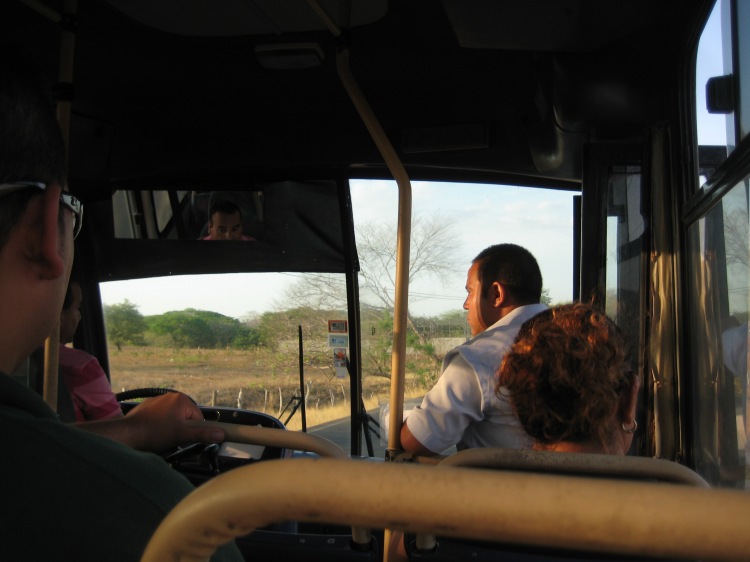 I was the only tourist.

My pack plunked upon my lap as the wheels began to turn. The attendant searched for local standees along the route, shouting “Liberia” through the open door. Occasionally the bus stopped, as he hopped off to solicit for riders, via foot. It made me smile. Relaxed and personal, opposite of a Port Authority time-frame. Sun-kissed eyelids peered through the window across dry country scenery. Faces peeked from corners of tiny villages, watching us pass dusty porch rocking chairs. Locals interacted, sharing smiles without interrupting technology. Elders conversed, relaxing in cooler evening air, as children kicked soccer balls. Farmland and cattle passed my window pane, as the bus bounced along bumpy roads, until the sky went dark.

Abruptly and unannounced, we pulled into a gas station. The man in the stairwell exited, struck conversation with the fuel attendant, who reached in the trash for a container. After spraying something in it, they proceeded to the back of the bus, then announced something I could not decipher. Locals stood, were handed colones and exited rapidly, as if infested with scorpions. The driver also stepped off. The only thing I knew to do was document with survival selfies, and giggle in the dark Costa Rican bus, alone, unsure what was next. 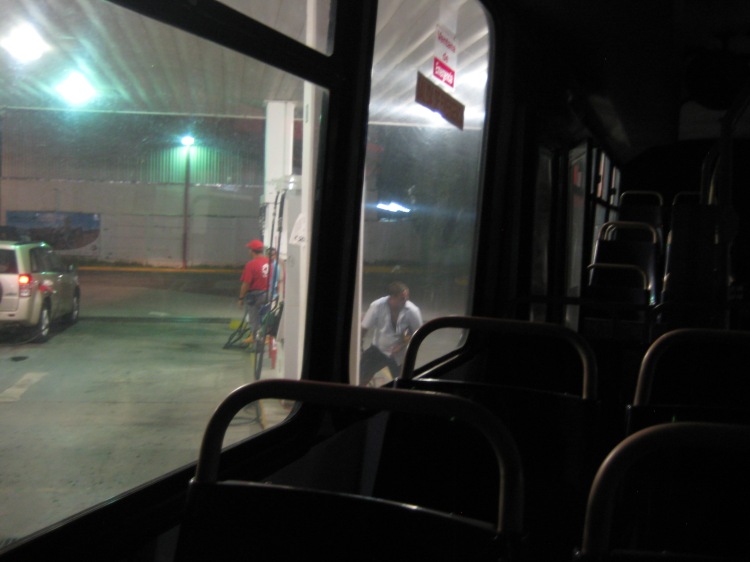 Soon the rig was back en-route, for all of cinco minutes. The last sign I had seen read; LIR 8km. Without warning, body language changed. Universally, red is not a good thing when lit upon a dash. More lights flashed upon that dashboard than an active runway, in a hub at night. The bus rolled to a stop. The driver motioned in pura vida fashion, versus flailing phalanges from a Manhattan cabbie. The attendant attempted pushing our ride off the road. The driver assisted, leaving me again, alone, in a dark public bus. One by one, locals appeared out of the woodwork to help. The terrain variable, the embankment gave way, jolting myself, my pack and the empty bus toward a rightward lean. Adrenaline hit my sandy veins, aware the rig could tip. Without words, the attendant extended his entire arm, and pointed his index finger straight ahead. That was my cue to exit my personal public ride.

Beyond exploration and adventure, I visited Costa Rica for two reasons; fresh fruit and relaxation. It was time I unpacked my survival beach hat…

My family thought I was in West Africa.

I lost myself exploring, playing at the beach all day, thus had not eaten since morning. The bus died beside a small market, that was still open. Giddy, I scooped aqua, peanuts and bananas in arms, like a howler monkey prepping to feed an infant, and paid with my final local coins. The bus by this point was stuck upon a cement block. I discretely took a picture, then started walking. Briskly.

My traveling soles made way upon dusty terrain, under the dark Central American sky. There were no street lights and few lit places. Light from the stars and a pretty moon led my way. In time, I sensed I was heading in the right direction, as opportunities to rent cars emerged from a dark horizon. One read; “Hola! Rent A Car”. It was closed, I felt lost, unsure whether to laugh or cry. I walked alongside a wire fence for what felt like miles, feeling safer than previously on the dark road, vehicles approaching, honking and stopping. In hindsight, I wish I had accepted the offer presented by a policeman on his bike. A cool escort to the terminal could have been the bling to this blog, but I trudged onward, as sweat dripped profusely over my thin winter veins.

In the mirage of the dark evening sky, a hotel sign appeared. I went in to inquire on availability, and sank into the comfy lobby chair. My body slowed with exhaustion. I wiped sweat from my nose, feeling relief in the cooler air. I had no time reference for how long I had been walking in the heat. I admired the artwork waiting for the front desk amigo, when I noticed four creepy lizards. Nature won. Numerous crawly animals spooked me this week. I was a sweaty, exhausted heap of tourist who had not shampooed in five days, attempting island dreads. I yearned for an animal free nap, thus continued onward.

I credit my second wind that night to the light aroma of local Don Pupo coffee beans, made by a single family, hand picked by the grandmother, I was carrying home for a friend, strapped to my pack. Inhaling beans, I heard a sweet sound, my saving grace, a prop plane overhead, nose gear facing the same direction as I. Runway lights became my destiny, comfort, a mirage for what felt a desert trek toward water. To stay safe and alert, I created a survival song and probably startled the guard in the station, near the runway fence. I was fairly loud, and equally surprised to find another human out there.

Hours after leaving the relaxed surfer town, I arrived at the Liberia International Airport. I sat in a hard chair outside the terminal to cool my body. Feeling safer, I was mindful of natures diverse songs, and beauty. I felt a little delirious, most likely dehydrated by the time I walked through the terminal doors. Unsure if loitering was allowed, I crept beside a traveler on an adjacent terminal chair, laid out shirts for padding, and pretended to sleep when the guards walked past. The next thing I knew, the ticket counter was opening for their morning departures. I had slept like a baby iguana. What an adventure! I wouldn’t change these experiences for the world…

So happy you're here! Allow me to take your imagination along with me on my adventures through the world and into my heart, via BeansDream.com. I started Bean's Dream at an Edinburgh hostel with a little help from some whiskey and a torn piece of paper. Ten years later, I find myself still following my dream of writing about traveling and life. Grab your favorite beverage, snuggle into a comfy space, and let me transport you through my heart to far-away lands. I appreciate your presence. Jenny "Bean" "About Bean" edited by: Tuckerman Wunderle View more posts

4 thoughts on “Stranded In Liberia On A Broken Bus, 8km From The Airport…”