Visual senses trace intertwined white and red on a Sochi Coke, transporting my mind to an Irish adventure with my wee lil’ nephew. Twelve at the time, he and I scampered through Dublin, exploring like curious leprechauns.

It was his first European adventure, once pried from the terminal massage chair. I informed the wee lad in attempted Irish dialect, it was a no rules vacation. Flip side to this euro resulted in () consumed cans of Coke.

Often unplanned travel moments engaging strangers exceeding comfort zones, provide precious enrichment. A concept introduced to me by a dear friend inflight to Zurich to participate in the 2006 FISA World Rowing Tour. Thus, I did not fret like an acoustic in the corner, once denied standby seats from DUB International. Extending our adventure to five days, I assured my friend the next 24 hours would definitely trump desk time.

Returning to the hostel, we scored bunks and pranced with relief up a back stairwell to explore. We met a new friend in that painted staircase. Three of us became instantly engrossed with intriguing conversation, chatting for hours. Stories caused belly laughs to echo, like a step dancers rhythm up the windy corridor. At a late hour our new friend handed my nephew a book to keep. 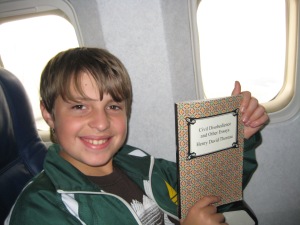 Peeking a peripheral through a glass encompassed Gravity Bar, we viewed Dublin above her rooftops, watched Tin Tin in a theater availing pint choices of Guinness or Ben and Jerry’s. We meandered streets, like plucked harp strings, until exploratory toes ached. Ear canals experienced local jigs, as tiny lads and lassies weaved throughout the crowd asking for change. We savored a warm pasta dinner in a restaurant along the River Liffey, and besides the little guy almost getting hit by a car racing up a sidewalk, and dodging thrown pelted objects from kids, I returned him home, unscathed. 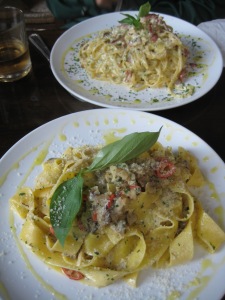 I shared with him learned travel tips: pack a carry-on, local currency, respect for all, and stay open-minded to cultural differences. Research tipping etiquette, learn survival words in the local tongue, and explore off tourist paths, which often brings forth treasures.

What a special nephew, ski buddy and friend I have. We laugh, cry, dance, talk and explore. He climbed Tuckerman Ravine at age ten, and obtains a photographic musical memory. He can recite lyrics prior to repeat, and can clear a crowd on any dance floor. He presents a live weekly DJ gig on a local station. Following a bike accident and serious injury, he walked himself home, iPod queued to “Eye Of The Tiger.”

He was such a joy to explore with, I was so proud of him and his bravery. He played video games against a German teen, washed his own dishes and conversed with the front desk.

This aunt and nephews shared International adventure was an Irish blessing, but most importantly, I am bloody blessed having him in my life…

So happy you're here! Allow me to take your imagination along with me on my adventures through the world and into my heart, via BeansDream.com. I started Bean's Dream at an Edinburgh hostel with a little help from some whiskey and a torn piece of paper. Nine years later, I find myself still following my dream of writing about traveling and life. Grab your favorite beverage, snuggle into a comfy space, and let me transport you through my heart to far-away lands. I appreciate your presence. Jenny "Bean" "About Bean" edited by: Tuckerman Wunderle View more posts

2 thoughts on “Dublin With My Wee Lil’ Nephew”