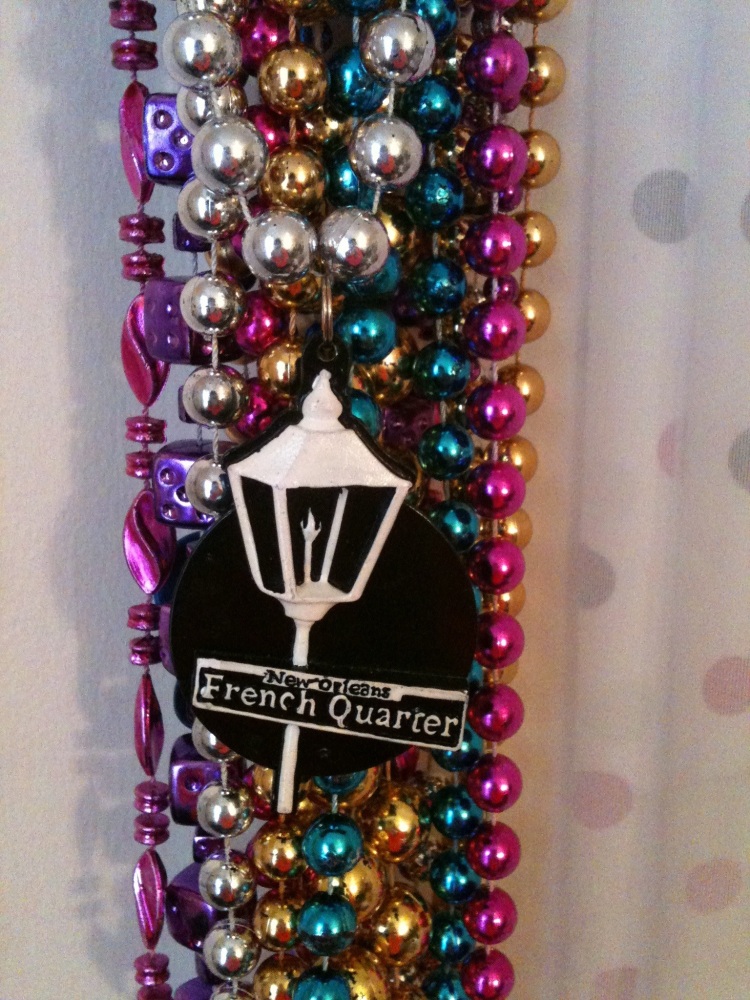 The E2 pulled to the curb as my depleted belly began regaining strength. Moments earlier I touched down in New Orleans to explore Mardi Gras for 24 hours. En route on a big bird a migraine surfaced disturbing my excited anticipation of the adventure. I felt nauseous like the finish of the Dad Vail. The watery sensation in my throat gave little time to make a plan, thank goodness I occupied an open row. I lurched forward grabbing the white bag in my seat pocket, no time for browsing Sky Mall. Previous vegetable intake exited screaming Big Easy, cutting my throat in reverse nourishing order. Then shyly and discretely I tip toed in my socks, bag in hand to the forward lavatory hoping others were focused on their monitors, not my bag o’ tricks. My face white as a Mardi Gras mask looked back at me in the mirror, dehydrated. I was happy friends had not been able to join. I contemplated flying home, unsure I had enough strength to pull an all-nighter. Returning to my seat I peered at the tele, its movements pushed my urgency to grab a second bag. I filled it like a rock star. If asked, I will represent in a commercial for those trusty lil’ baggies! Following this classy early morning performance, I slept like a lazy baby lizard in the bayou, stretched comfortably across my three open seats. I was “that girl” prior to setting a toe on Bourbon Street.

On the E2 bus I met a new friend in the industry with equivalent passion for traveling. We chatted and took in the local flavor. Not long after, four of us began exploring Nola dodging and slipping on mounds of colorful beads. Parade routes filled with semis honking their horns during business hours. Loud beats echoed off city buildings as beads and paraphernalia were chucked into thin air. Chilled beers sold curbside, storefront dance parties, no rules, fun costumes, a street party like none other. We had southern thirst quenchers and stood in line behind women in neon wigs for dinner at a local seafood joint. When traveling I like trying something local and new, today I had alligator.

People watching is prime during Mardi Gras. It’s not a place to bring your Mom, but it was on my list. Darkness fell like beads off balconies. So much to take in, so much giggling. Posing for a picture, I stood next to a beautiful mare and mounted policeman until she nibbled my golden beads and got reprimanded.

Hours later we had breakfast at a local space that served mean seafood and an unrehearsed show. Employees attempted to push a failed oversized refrigerator out the small front door. Photographs of Katrina hung on the walls making the local vibe even more precious.

So happy you're here! Allow me to take your imagination along with me on my adventures through the world and into my heart, via BeansDream.com. I started Bean's Dream at an Edinburgh hostel with a little help from some whiskey and a torn piece of paper. Ten years later, I find myself still following my dream of writing about traveling and life. Grab your favorite beverage, snuggle into a comfy space, and let me transport you through my heart to far-away lands. I appreciate your presence. Jenny "Bean" "About Bean" edited by: Tuckerman Wunderle View more posts